It's been over 3 years since I've posted on this blog.  Many things have changed, evolved, disappeared, morphed since last I wrote.  After a long hiatus, I am moving on from this blog because I've started a new one: Simply Moments.  Following the theme of simple, it's just that, no frills, just basic writing with maybe a photo or two as I get back in the swing of things.

Thanks to everyone who read this blog over the years; it was a joy to write.  Hopefully I'll see some of you on the new site...
Posted by terlee at 12:46 PM 1 comment:

For the past two weeks or so I've been playing with different ways to change my blog.  You will notice, dear readers, that it looks exactly the same.  Sigh.  I was hoping the change would give me a renewed interest in writing.  Apparently I'm so far out in left field these days, I can't even come up with a new look.  Deeper sigh.

I'm not sure what's wrong.  I think perhaps my pilot light has gone out...

I was driving through the VA grounds the other day, past a lovely pond and happened to see the most perfect reflection.  After a very hard rain, the culvert (is that what the drain pipe thingy is called?) was half-submerged in water...and made this: 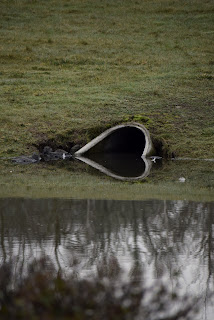 So, regardless of losing my creative spark...I wish you all a very wonderful and happy Valentine's Day weekend...!!
Posted by terlee at 1:58 PM 7 comments: 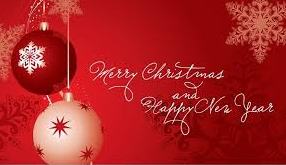 I've been utterly worthless with my blogging these past several months, barely managing to write, either here or with the ongoing serialized novel, let alone read a book, and my camera is gathering dust on the bookshelf so my photography has languished as well.

I have plans to do better in the New Year.  Not a resolution, mind you, because I don't do those, but a sincere attempt to organize my time, get focused and step away from the endless torture of owning an older home.  No doubt when Spring and Summer come however, I will once again be consumed, but that's months away and not something I want to think about right now.  Ugh.

So, Happy Holidays to everyone. Think kind thoughts, dream of childish things and believe that--as humans sharing this beautiful planet--we can and will do better in the coming year. 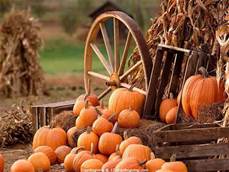 Have a most excellent day, dear readers...

Posted by terlee at 8:13 AM No comments:

View Down The Stairs... 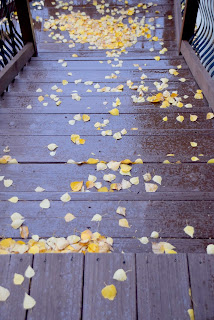 ...or how to type with two fingers whilst right shoulder is in a sling.  Yes, peeps, I managed to torque my shoulder, didn't take care of it properly and now can barely use my arm.  Many tears, hours of lost sleep and a very bad attitude have prevailed until I finally accepted the fact that if I don't stop abusing my arm/shoulder, I could end up in serious trouble, so...pain pills, an uncomfortable sling and an attitude adjustment were in order.

And this all started with a simple chore, one I've done dozens of times...

I have a very large palm tree that needs to be lifted into the kitchen sink to be watered.  About ten days ago I hauled the thing to the kitchen, watered, then couldn't get it out of the sink.  Several muscle-crunching minutes later, I get a grip, lift with all my strength and as I'm hoisting the plant, I feel this sort of popping, tearing sensation, followed by a burning blade being shoved into my shoulder.  I stagger across the kitchen, plop the palm into it's place and hop around for awhile trying to rub away the pain that is radiating from my shoulder to my fingers.

Over that week I washed the car, hauled a load of heavy stuff to the Goodwill, even carved two pumpkins, each task making my shoulder hurt more until this week I thought ripping the thing off and getting an artificial limb was a most excellent idea--anything to stop the agony.

So today I gave up--about a week too late, but still, better late than never.  And now Nick can stop badgering me to take care of myself.

After I carved the punkins last weekend, Nick rigged LED lights that make one glow bright red (weirdly, the red doesn't work with my camera), while the other shines blue.  They look really cool at night in the pitch dark. 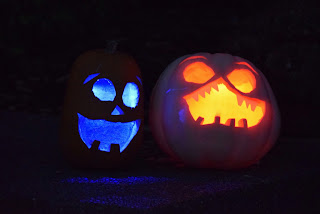 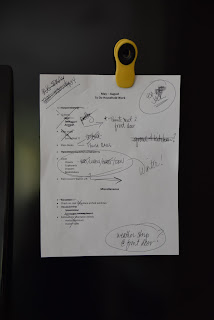 I know I've been horrible about posting lately.  Well, more than lately...like for months, but I had a great deal of crucial and necessary house/garden work to do this year, during one of the worst Summers of all time--drought, humidity and forest fires.

I'm feeling pretty good about crossing almost everything off the list I started in May, though whilst in the middle of things, I really just wanted to get in my car and drive away.  Forever.

Okay, my two fingers are getting tired and my shoulder hurts, so I'm going to take another pain pill, make a nice cuppa, and sit down for awhile to rest my bones.

Don't forget in all the excitement of parties and trick or treating and woo hoo it's Hallowe'en that Standard Time begins on Sunday, peeps.  Buggers...

Nick's parents were here last week.  They stayed with me because I have more room.  It was really fun, getting to know them.  They left Monday morning to spend some time at the Oregon coast before heading back to Colorado, but they called yesterday and wanted Nick and I to meet them at one of our local restaurants for a final visit over lunch.

So, mid-morning I was out in the back garden watering before the rendezvous--because yes, it's still hot here--when out of the blue, like someone flipped a switch, every siren in town began to wail.  I was startled, and worried.  What in the world would make fire, ambulance and police all ignite at once? My first thought was the lumber mill outside town had caught fire, or exploded, though I hadn't heard any booms.

About an hour later, I drove down the mountain to Nick's.  He took the wheel, his face grim.  I asked him what was wrong as he merged onto the freeway.  He looked at me and said, "You haven't heard?"

"I heard the sirens going all over town earlier, was it the mill?"

"There was a terrible shooting at the college," he said.  "There were several people killed."

I stared at him for a minute, not comprehending.  "Was it Oregon State or the University of Oregon? It must have been bad if they needed our help."  (Both schools are in towns about an hour north of me).

Nick glanced at me again.  "Our college,"

"What are you talking about?  Umpqua?  That can't be right."  As the words were spilling out and my stomach was beginning to roil, a LifeFlight helicopter roared over our heads toward the local hospital and two ambulances blew past followed by two State Police cars.

It was true.  In my little corner of the world, an inexplicably tragic act of horror had just taken place. I've watched this scenario play out many times on the television; I've felt for the victims, the communities, the families and friends.  But never, not ever, did I imagine it happening where I live, in the back of beyond small town America.

Our lunch with Nick's parents was fraught, the whup-whup of helicopters and sirens erasing appetites as we watched the story unfold on the big screen televisions at the restaurant.  We parted with extra tight hugs and promises to keep in touch.

Last night there was a candlelight vigil in the park--a place usually filled with kids and picnics, summer music and art festivals.  In the middle of town, the park meanders, following the bends in the river.  It seemed like most of the town was there.

There's a strange sense of solidarity when people come together in disbelief, sadness, shock.  I've seen this time and again on the news, but never understood it until now.  You want that little candle to somehow light the darkness, keep the evil at bay.  You stand next to strangers that aren't strangers after all and you wonder how this happened...why does it continue to happen?

Homeland Security, ATF, the FBI and every major news network have taken over the town.  I had to grocery shop this morning and a store that is usually bustling with noise and clatter, was almost silent.  Afterwards I went to my local coffee kiosk to check on the barista girls as I know several of them go to UCC. Thankfully, only one was in class yesterday.  This morning she told me the images in her head will be with her forever.  We cried.

I have always felt safe here, in Roseburg.  It's off the beaten track, quiet, unassuming and small. The ground has shifted under my feet, peeps, and I don't know how to find my balance.

No Place To Hide - On Hiatus